Baseball, beer and the boys of summer at Detroit’s Comerica Park

Nothing says summer like an ice cold beer at the ballpark.

Hopefully, it’s a Summer Shandy in my hand at Comerica Park. And, on Sunday, May 26, it was!

As a belated Mother’s Day gift, I took my mom, an avid viewer of Detroit Tigers’ games, and my 94-year-old grandma, whose love for the Tigers has trickled down the generations of our family, to this  6-1 victory over the Minnesota Twins. This was my second time watching the Tigers in person this season. You can read about my experience watching my hometown heroes play at Nationals Park in Washington, D.C., too!

As we strolled around the stadium, past some exhibits about baseball’s history in Detroit, Mom and Grandma gave me a couple family history lessons related to America’s favorite pastime. Apparently, my grandfather and his buddies went to a Detroit Tigers baseball game just before his wedding — a bachelor party tradition I’m sure many soon-to-be grooms in the Detroit area still follow. Baseball’s role as a prominent player in our family’s outings probably dates back to the 1920s or ’30s when my great-grandfather would take one of his eight children (on a rotating basis) to sit in the bleachers at the old Corktown ballpark on Michigan and Trumbull Avenues. Although the ballpark changed several times from its foundation as Bennett Park in 1896 until Tiger Stadium closed, the Tigers played in the same location until moving downtown in 2000. 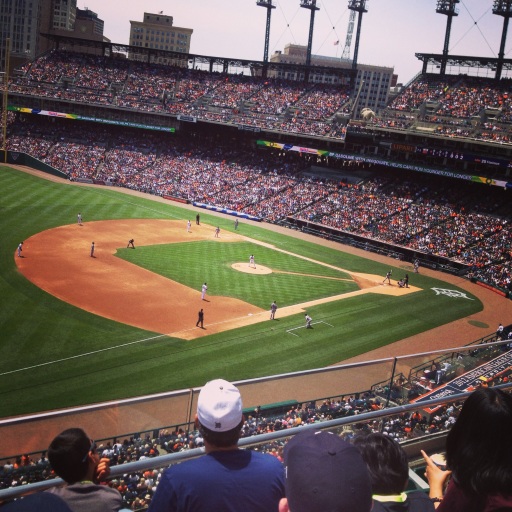 Since 2000, the Detroit Tigers have played at Comerica Park in downtown Detroit.

Our family’s ties to Tigers’ baseball are like many in the Detroit area, which was evident as Comerica Park was filled with families — grandfathers introducing the game to their young grandsons, young couples pushing tots in strollers and fathers somewhat begrudgingly handing over $20 bills to teenage daughters seeking soft pretzels with cheese. Comerica Park is a great destination for a fun-filled family outing. On Sundays, kids are invited to run the bases. The ballpark features a Fly Ball Ferris Wheel and the Comerica Carousel, which has 30 tigers. And, fans of all ages pose for photos with Paws, the Tigers’ mascot.

Amusements and attractions for kids of all ages at Comerica Park include the Fly Ball Ferris Wheel, located near the Tiger Den and Beer Hall.

Since I attended the game with my grandmother, I purchased a parking pass for Lot 5, which is located adjacent to Ford Field and diagonally across from the Comerica Park entrance into the Tiger Den and Beer Hall. The Beer Hall has an impressive list of craft and international brews, a full food menu offering a whole lot more than hot dogs and chicken tenders, and large wooden picnic tables. As we entered through the Beer Hall, we realized it would be a perfect place to each lunch. Having arrived around 11:30 a.m. for a 1 p.m. first pitch, we beat the crowd and easily found an empty table in the cool, sheltered tavern. I would recommend eating here if you are looking for a spot out of the sun, you want to eat something other than typical concession stand fare or you really like beer.

The Beer Hall is located near the Fly Ball Ferris Wheel on the third-base side of Comerica Park. 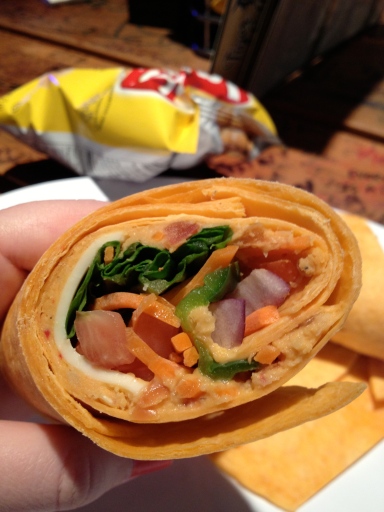 The Beer Hall’s menu offers a veggie wrap. The sundried tomato tortilla is filled with provolone cheese, tomatoes, red onion, green pepper, carrots, lettuce and hummus. It comes with chips, but you can order fries for an extra cost. 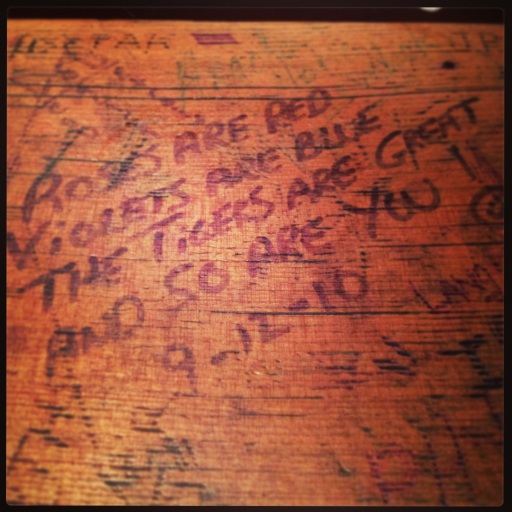 Visitors leave their mark on the picnic tables in Comerica Park’s Beer Hall.

The Big League Grill is located at several spots inside the ballpark. It serves traditional baseball game fare. 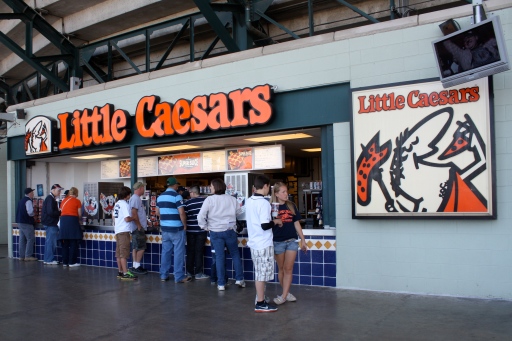 Little Caesars shares the same owner as the Detroit Tigers and the NHL’s Detroit Red Wings.

Who’s your Tiger? Is it triple-crown-winner Miguel Cabrera? Is it the 2011 Cy Young award-recipient Justin Verlander? Or, is your Tiger the big slugger with his own family ties to Detroit baseball, Prince Fielder? No matter who you root for, the Tigers’ active roster has plenty of All-Stars and rising stars to go around.

The Tigers’ starting line up on Sunday, May 26, against the Twins

Know before you go

Parking is available in nearby parking lots. Parking attendants usually charge about $5 per car. If you plan to park this way, make sure you bring cash. You can also purchase a parking pass for one of Comerica Park’s lots. To park in Lot 5 for the Tigers V. Twins game, I paid $25 and purchased it online with my tickets.

To avoid parking near the ballpark, you can take the Detroit People Mover elevated train, which has a stop about one block from the ballpark. You can also park at the Greektown Casino parking garage and take the People Mover from the casino to the Broadway stop. A People Mover ride costs 75 cents one way. Greektown is a fun area to eat, drink or gamble before or after the game. Exclaim “Opa!” as your Saganaki is set ablaze at Pegasus, dig into a deep dish at Pizza Papalis or throw back a couple brewskis at the Old Shillelagh.

Wish you were here,